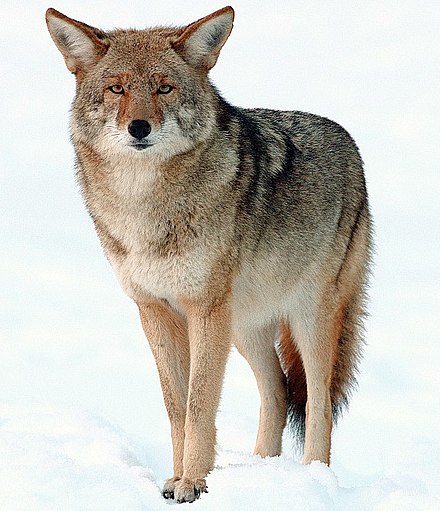 Photo from Wikipedia, Coyote in Yosemite

Sometimes I wish I was 100% retired. But then I get the privilege of talking to amazing people, like Ferdie Yau of Behavior Vets NYC about his work on the Gotham Coyote Project and his “coyote scat detection dog, Scout. Ferdie is one of those people whose enthusiasm and curiosity is so strong it would energize a slug. He’s a professional dog trainer, via a life training animals in the Central Park Zoo and studying human/jaguar conflicts in South America. (I’m going to write a post in the future about what it’s like to train sea otters versus sea lions, foxes versus polar bears. Oooooh, that’s gonna be fun!) 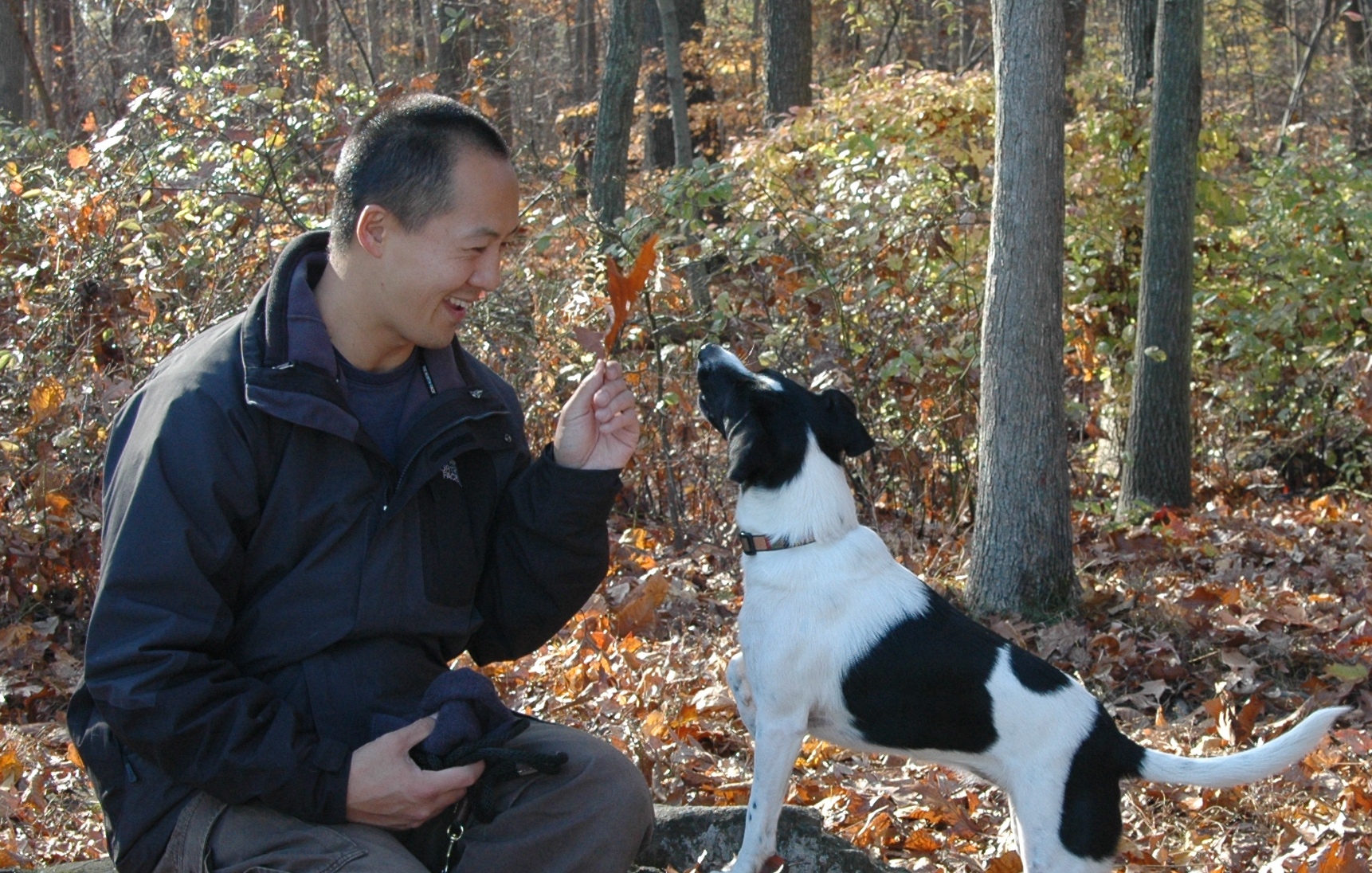 But today, it’s all about coyotes, or canis latrans, which translates as “barking dog.” Coyotes are also known as prairie wolves, brush wolves, American jackals, yotes, pasture poodles, yodel dogs, and, as someone said on a stream I read from Texas, “dead.” Yeah, it’s the old “predator as evil” thing, just on a different level than attitudes toward wolves.

Attitudes toward coyotes across time and cultures range from symbols of military might, to savy and amusing tricksters, to “cowardly and untrustworthy animals” by Europeans who colonized America (Wikipedia). Sadly, in my mind, that attitude has changed little in the United States. While wolves are both revered and despised in this country, evoking what can only be described as astounding intensities of love or hatred, coyotes get little attention except from those who want to kill them. However, studies like the Gotham Coyote Project and a similar project in Madison, WI, the Urban Canid Project (coyotes and foxes) are bucking that trend, and adding to our knowledge about this impressive species.

Coyotes are complex, fascinating animals, who, pure and simply, deserve more respect. Previously a canid of the plains and the desert, coyotes have expanded their range significantly since the arrival of Europeans, (and the slaughter of wolves), and they now range across all of North America, except for the most northern reaches of Alaska, Canada and Greenland, and south into Central America. 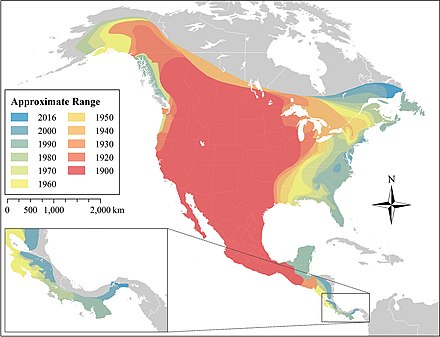 Genetic studies suggest that North American wolves have a substantial amount of coyote DNA, and we know that coyotes and domestic dogs can also interbreed (“coydogs”). 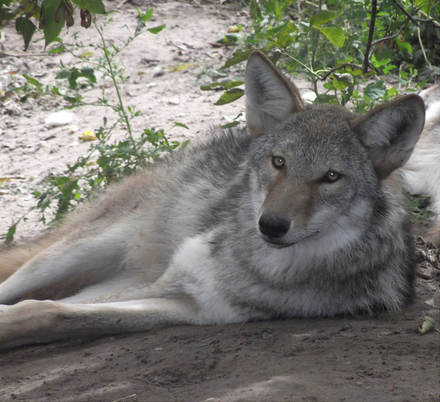 A coyote’s social organization is very much different than the wolf, who specializes in taking down large prey as a pack. Coyotes pack up when their resources demand it, and live singly when they are better off hunting small prey that can’t be shared. They can live as a family unit, a mixed pack of unrelated individuals, or spend time on their own, depending on what works best. 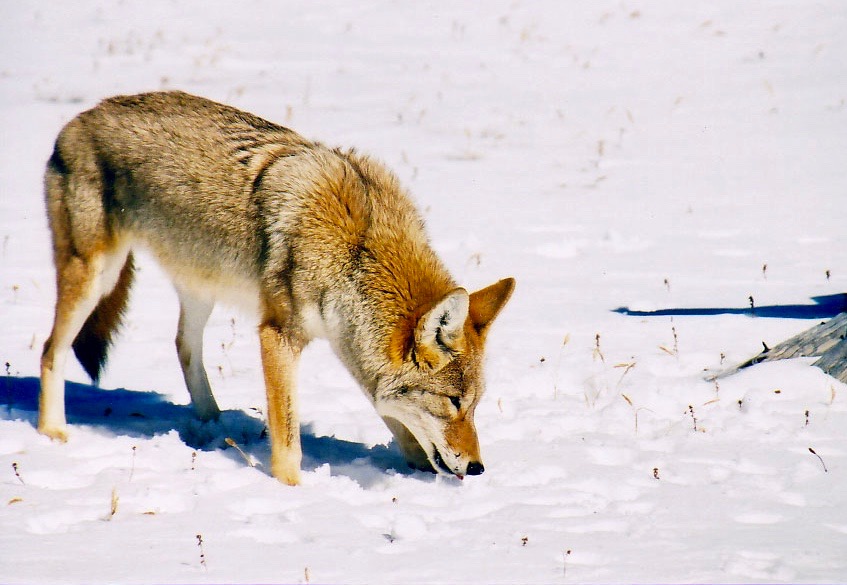 Photo we took in Rocky Mountain National Park. Was this coyote looking for trash?

My favorite new fun fact about coyotes is that they occasionally hunt together with badgers, digging up rodents side by side. Wikipedia tells us that some have been seen lying together, licking each other’s faces. Insert audible “Awwww” here.

This flexibility is part of what causes conflicts between people and coyotes, because, increasingly, coyotes are moving into suburban and urban areas. Ferdie tells me that genetic studies suggest that a small number of coyotes traveling into the Bronx have since expanded into an impressive number of successful breeding groups in the city. Here’s from a trail cam in the Bronx of some coyote pups playing:

Unlike the standard story about coyotes being crepuscular hunters (most active at dawn and dusk), the Bronx coyotes are adept at avoiding people at all costs by hunting only at night, and often traveling in brushy areas too dense for people to use. This is especially true of the females, which was only discovered when Ferdie’s Scout began finding scat in brushy areas off the trails, not visible to the human eye.

Coyotes do well here in southern Wisconsin, and, as former lamb producers, we are well aware of their presence. Without them, I never would have had Bo Peep and Tulip, my two Great Pyrenees livestock guarding dogs. (Whose presence–primarily scent marking and barking–resulted in no lambs lost the entire time that I had them.) My love for these two dogs knows no bounds, and I will forever be grateful to coyotes for bringing them into my life.

But coyotes can cause trouble, as is true of any large predator when it’s habitat overlaps with people. Coyotes can and do kill livestock, especially lambs. Coyotes have, although rarely, killed domestic dogs, and tragically, a young child. Attacks on humans and domestic dogs are increasing, especially in California.

Ferdie’s work, and that of other experts, are part of an effort to ameliorate conflicts between people and coyotes. Most importantly, they are working to educate people to avoid feeding coyotes, either intentionally (not uncommon, sigh), or unintentionally (leaving food out for feral cat colonies for example). Coyotes are going to go where the food is, and that means if you leave dry dog food outside in your yard, it’s bait for a coyote. Coyotes are just as fond of garbage as any other flexible omnivore–research has found plenty of examples of human garbage in the stomach contents of coyotes.

There are other ways to avoid conflicts with coyotes, as advised by the Urban Coyote Project, including don’t let your pets run loose, don’t run from one but don’t chase either, and report any aggressive or fearless coyotes to animal control or the police. (Or either of the coyote projects I’ve mentioned.)

Here’s some specific advice from Ferdie: If you have coyotes in your area who are doing a good job of avoiding humans and conflict, one of the best ways to maintain that peaceful relationship is to let them be. Let the coyote parents teach their young how to avoid humans so successive generations of coyotes stay out of trouble.

This reminds me of a friend who has a couple hundred sheep in an area full of coyotes. He also has three livestock guarding dogs. Friends ask him why he doesn’t shoot the coyotes, and he answers “That would be crazy. All the adults in the area know to stay away from my farm because of the LGDs. If I shot them, then other coyotes, who haven’t yet learned about the guard dogs, would just come in and cause trouble.” Wise words indeed. 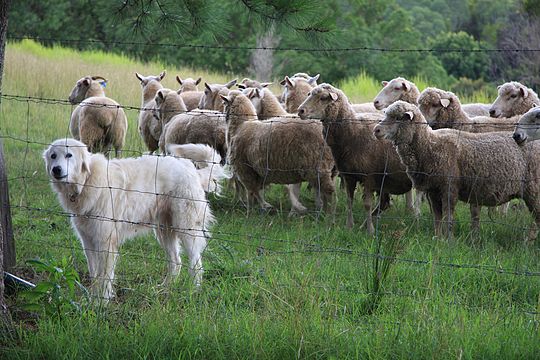 There are some other things that I wish we could do for coyotes. One is fighting to ban “coyote killing contests,” which are legal in 40 states, including Wisconsin. These anachronistic “contests” violate just about every ethic known to anyone who cares about sentient animals and the environment. Contact your state DNR or local legislators if you agree. I’ll be doing that this week.

In addition, DNR regulations about the hunting of coyotes are significantly thin. I won’t go into the details here, because it varies by state, but know that coyotes are used by “Licensed Hound Dog Trainers” to teach hounds to track coyotes rather than other game, and the rules that regulate what people can do, or not do, to coyotes leave, uh, a lot to be desired.

I don’t want to end on a downer here, but coyotes are fascinating animals that we need to learn to live with. As someone who raised lambs for decades, I know full well that they can be destructive. But that doesn’t mean we can’t find ways to live with them, with compassion, curiosity and respect.

What about you? Coyotes in your area? Any problems with them, or with how they are treated? (Note: Past posts related to respecting wolves or other canid predators have resulted in death threats to me and my dogs. Any comment coming even close to that will be referred to law enforcement, and will not stop me from saying what I believe. )

MEANWHILE, back on the farm: From no rain to nothing but. From really cold to REALLY hot to jacket weather to humid and sticky. It’s disorienting, but I’m so grateful that we finally got rain, unlike so many areas in the midst of a horrific drought. The sheep are thankful too, because the pastures are green again and they don’t have to start eating dry, old hay instead of juicy green grass and clover. 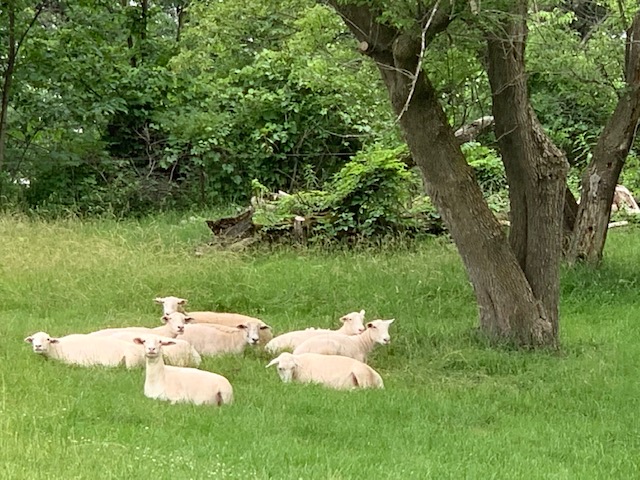 Skip and I discovered what’s called a “widow maker” while walking back down the hill to the house after working sheep. This large branch broke off, but then hung up on another branch, just waiting to fall on some unsuspecting, squishy mammal. The name is not overly dramatic; these hung up limbs can kill and hurt people, and do on a regular basis if they are not dealt with carefully.

Jim came to the rescue. He tied a long cord to an axe (he’d drilled an eye bolt into it’s base for a rope attachment), threw the axe with trailing cord over one of the branches, moved safely away, and proceeded to pull. And pull and pull and pull. 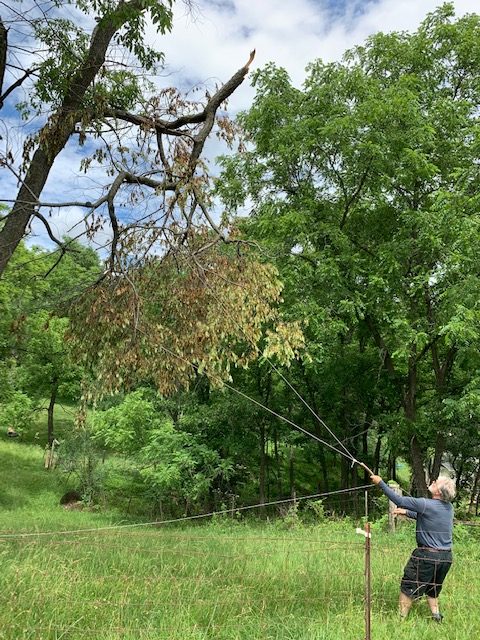 My only contribution was to suggest a different angle–I always did love physics–and bingo, off it came!

While I was taking photos of the branch (Wild Cherry tree, by the way), I happened upon this tiny bit of loveliness growing under a fence. 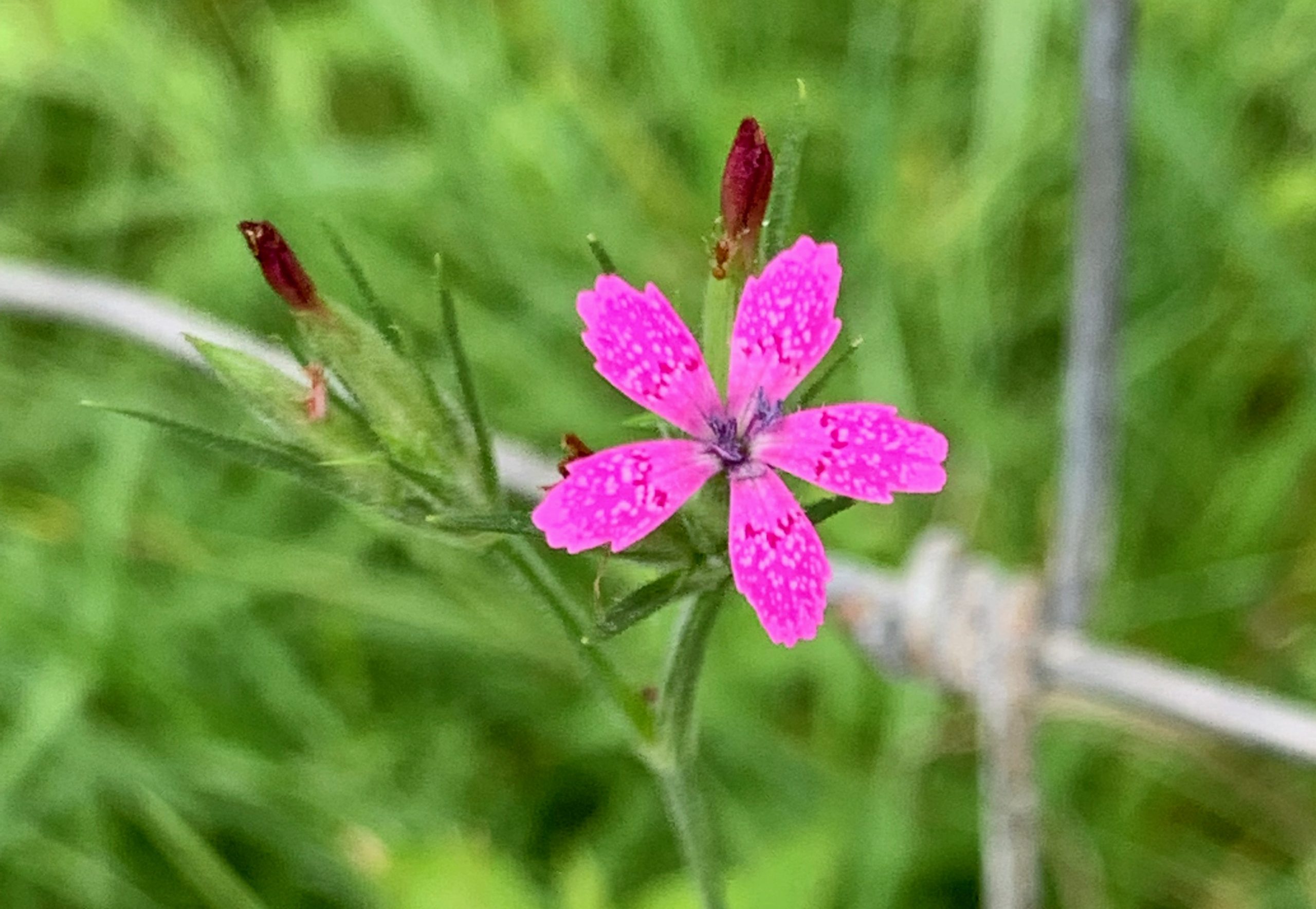 It’s a Deptford Pink, maybe maybe a result of all the work we’ve done clearing honeysuckle and seeding with native plants? So far it’s been all blood, sweat and tears, so I’m thrilled to see this tiny (less than an inch) potential reinforcement for all of our work.

Here’s to some loveliness in your life this week. And check out the status, and regulations about, coyotes in your area. They deserve our attention.

Stunned. Does It Happen to Dogs Too?

Piloerection in Dogs: Scared, or Just Glad to See Me?

No Work on Labor Day