Home Training Stunned. Does It Happen to Dogs Too? 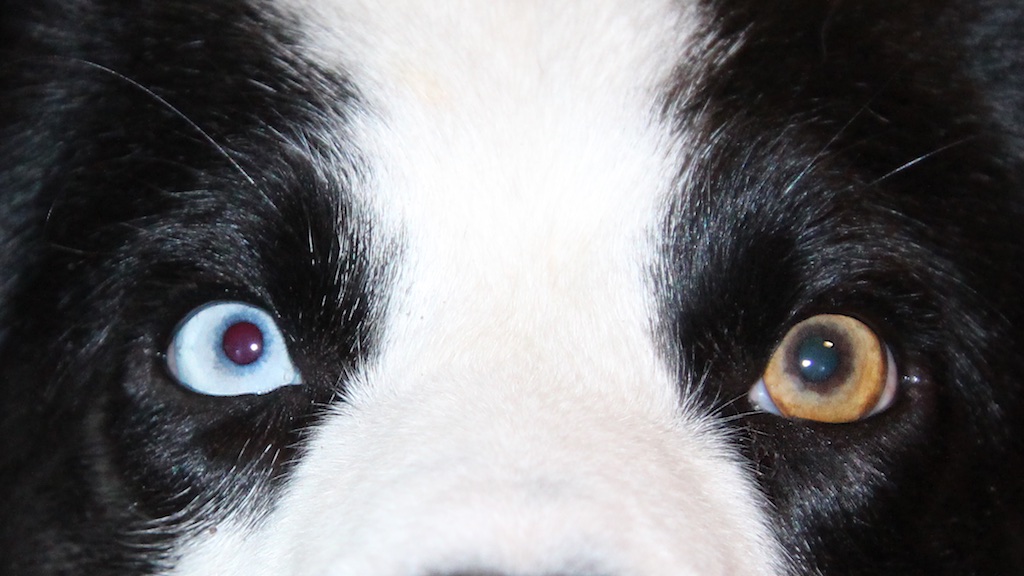 I was at a sheepdog trial recently when a friend reminded me of an incident from long ago that I described in For the Love of a Dog: Understanding Emotions in You and Your Best Friend. Here’s the text:

At first, all I saw was a white blur out of the corner of my eye.  It was a long way away, maybe 500 yards, and initially I wasn’t sure what it was. Most of my focus was on my Border Collie Luke, who was running his fastest about two hundred yards away.  I’d sent him on a long outrun toward a flock of sheep during a “fun day,” when herding enthusiasts get together and revel in dogs and sheep and the sloppy kisses of young puppies.

Many people there that day were serious competitors in herding dog trials, and were grateful for the opportunity to hone their skills away from home. Luke and I, however, were there just to play. Luke was too old to compete in trials, so we went for the pure joy of it.  We loved working together, Luke and I, finessing sheep gently and quietly across the countryside. A classic workaholic, Luke loved working sheep so much he had no interest in food, tennis balls or even bitches in heat when there was a job to do. For me, watching my trustworthy, black and white dog doing a perfect outrun on an emerald green hill made my heart get bigger and my soul feel full. That’s how I was feeling that morning as I watched my good, old dog run perfectly and reliably toward the woolies on the far hill.

But all my feelings changed as I realized the white blur running toward Luke was a hundred and twenty pound working Great Pyrenees, who had escaped temporary confinement and was barreling down on Luke to protect his flock. We were on a large, isolated farm with several dispersed flocks of sheep—a smorgasbord to the coyotes and stray dogs that commonly roam the countryside. Many of us in southern Wisconsin need working guard dogs to keep our flocks safe, and this farm had two of them.  Unlike my guard dog, Tulip, who now protects the farm from the living room couch, these dogs lived exclusively with the flock, and were serious to the bone about killing anything that threatened their sheep.

As I watched the guard dog run toward Luke, my feelings of joyful fulfillment shifted to those of abject terror. The thought that I was about to watch my dog being attacked and possibly killed overwhelmed me.  Purely and simply, I love Luke so much it almost hurts. In Dog is My Co-Pilot, a book of essays about why we love dogs so much, I said about Luke:  “And I still love him so deeply and completely that I imagine his death to be as if all the oxygen in the air disappeared, and I was left to try to survive without it.”

Horrified at what I thought was about to happen, I screamed, “THE GUARD DOG IS OUT, THE GUARD DOG IS OUT.” Stating the obvious wasn’t going to solve the problem, but it seemed to be all I could do. For the longest second imaginable, my mind was a black hole, as if my emotions had sucked away the rational part of my brain and left a cavernous skull full of, uh, nothing. I can remember that feeling of terror now, and can visualize the scene as if in a photograph: emerald green pasture, black and white Luke in full stride just where he ought to be, and a white bullet of doom streaking across the grass toward him.

But what of Luke?  What went through his mind as he dashed through the grass with a canine hitman running toward him? Was he as scared as I was? And if he was, how much did his version of being scared resemble mine?

This segment is from the chapter that introduces emotions, in a book that is all about emotions in us and dogs–what we know about what’s shared and what’s not, at least so far. (A lot.) But what I’m wondering about right now is the concept of “going blank,” or being so frightened or stunned that your brain goes on hold and there’s nothing going on inside of it. (Or nothing perceptible.) It’s a common symptom of PTSD (see The Education of Will), but it happens to most of us on occasion.

I have two related questions: First, have you gone blank when something happened with your dog? If so, I hope you are forgiving yourself for it, no matter how it all got resolved. I was stunned into inaction more recently when someone assaulted Skip, and I have had to do some serious work to forgive myself for it. I’ve found that many of us who love dogs so deeply are often hard on ourselves for not being perfect. It helps to have spent decades assuring clients that they can throw away the guilt they feel for that one moment in which they didn’t react in time. Yup, we’re all human. 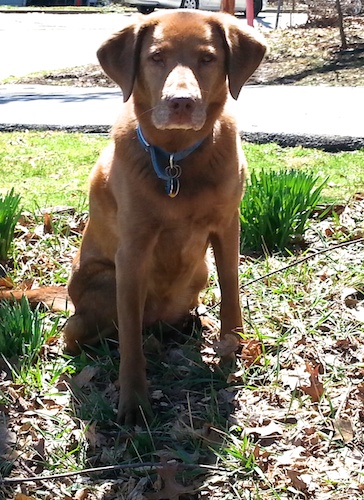 But second, and admittedly unanswerable at the moment, does this happen to dogs? Are dogs stunned into inaction and blank brains by something that frightens or confuses them? We can only guess, but I can’t imagine why it wouldn’t happen to them too. As I talk about in For the Love of a Dog, so much of the system that powers our emotions are similar in dogs and people. (But see How Emotions are Made by Lisa Feldman Barret.)

We all know it’s too easy to misinterpret why a dog does what it does. So often we assume willful disobedience, as if dogs are in complete and full control over all of their responses. (When we are not; you know, the “smarter ones.”) I’m wondering here if certain types of “disobedience” are situations in which a dog simply can not respond, because it is stunned, just like we can be.

Here’s one example, that’s not quite perfect but still relevant and perhaps illustrative: I have learned not to ask Maggie to do anything at all when she is first let out into a new environment. She is simply not capable of doing anything until she has spent time using her nose to adapt to where ever she is. I’m not sure that this is truly a version of being “stunned,” because she’s not immobile and I doubt that her brain is blank. But, there is no room in it, no room at all, for anything other than finding a way to center herself with her nose, and to a lesser extent, her eyes. 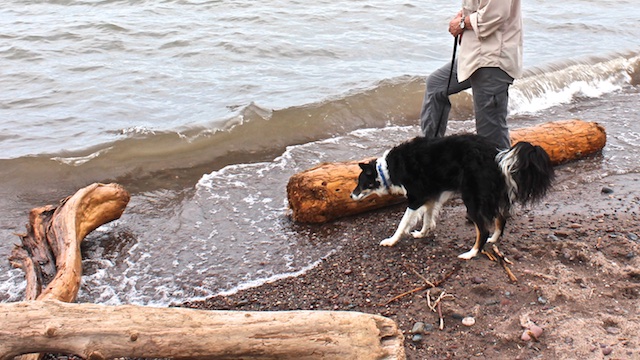 Maggie was overwhelmed by the sights and smells of Lake Superior. I just let her alone to get used to the environment. I truly believe she was incapable of responding to even the simplest of cues from me at that moment. I’ve learned to keep her on leash for a moment, even in a place she could go off, until she has  processed her new environment.

What about you? Any examples? Ponderings? I’d love to hear what you think.

And what about Luke all those years ago, at risk of serious injury from a no-holds barred guard dog? He was fine, because my friend, whose brain was working just fine, quietly said “Down your dog.” I did, and he hit the ground like a marine in boot camp and stayed still while I crooned “Stay there, stay there.” The guard dog ran up, sniffed Luke who remained motionless, and trotted away. Crisis averted.

MEANWHILE, back on the farm: Just back on the farm from a short but heavenly vacation to Acadia National Park in Maine. Yup, it’s all it is cracked up to be: Gorgeous, fascinating and inspiring. (And yes, busy, but it was relatively quiet if you go out in the morning and avoid the crowds in the towns.) We had a lovely time on two Acadian Nature Cruises, one in the morning and one on their sunset trip. We saw lots of seals, including these Grey Seals who, after I took this, left the rocks to come check us out. 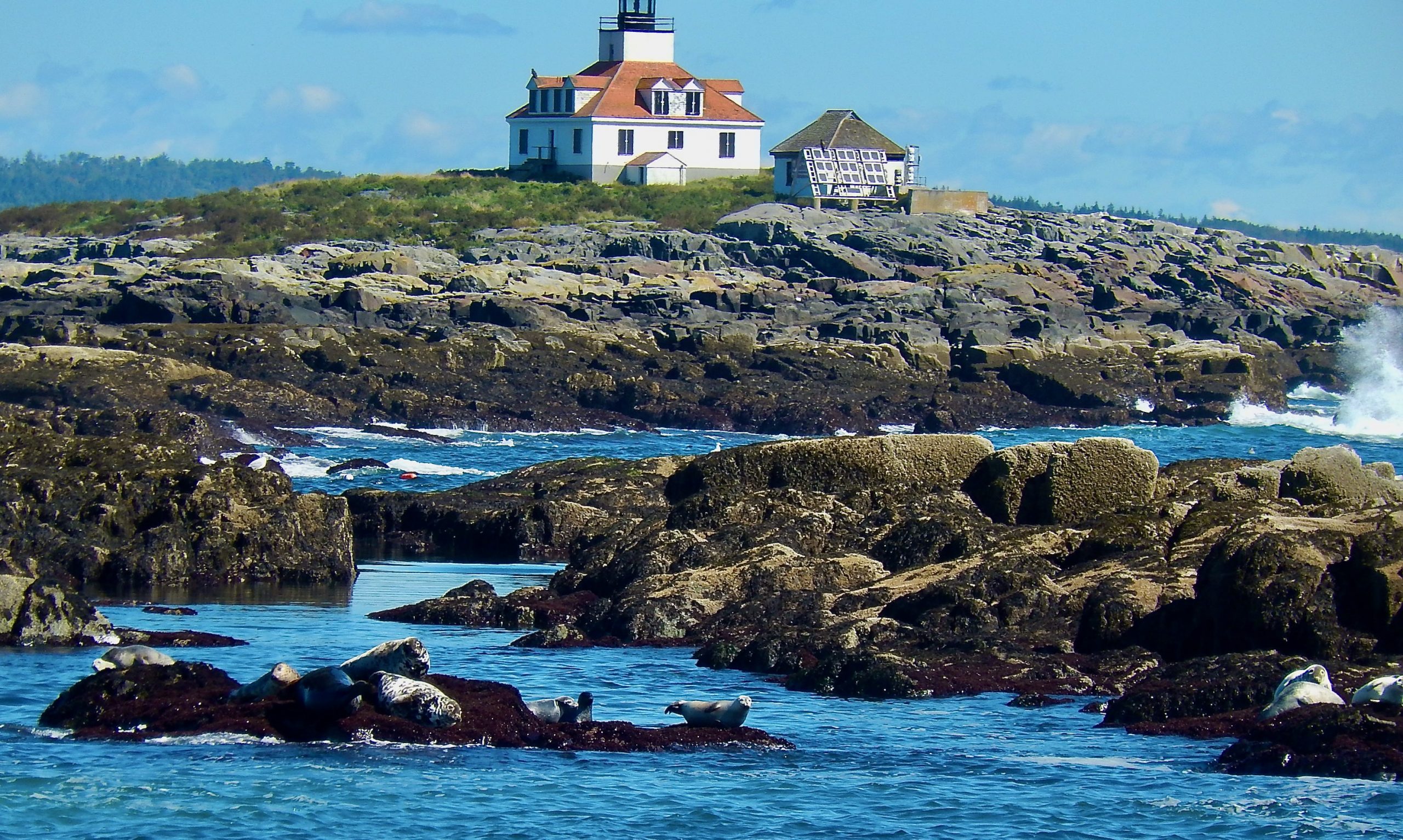 If you look REALLY closely you can see a Bald Eagle on the grey scaffolding in front of the roof of the small building to the right of the lighthouse. Our guide mentioned she was surprised there were so few gulls on the island (Egg Island), and then discovered that eagle and 4 immatures on the other side of the house. Gulls and eagles are not friends, thus the lack of other birds.

The entire park is a wonderland of massive granite cliffs, gorgeous trails and ridiculously beautiful views. The photo below is from the top of a small mountain, the South Bubble, overlooking Jordan Pond and the ocean beyond: 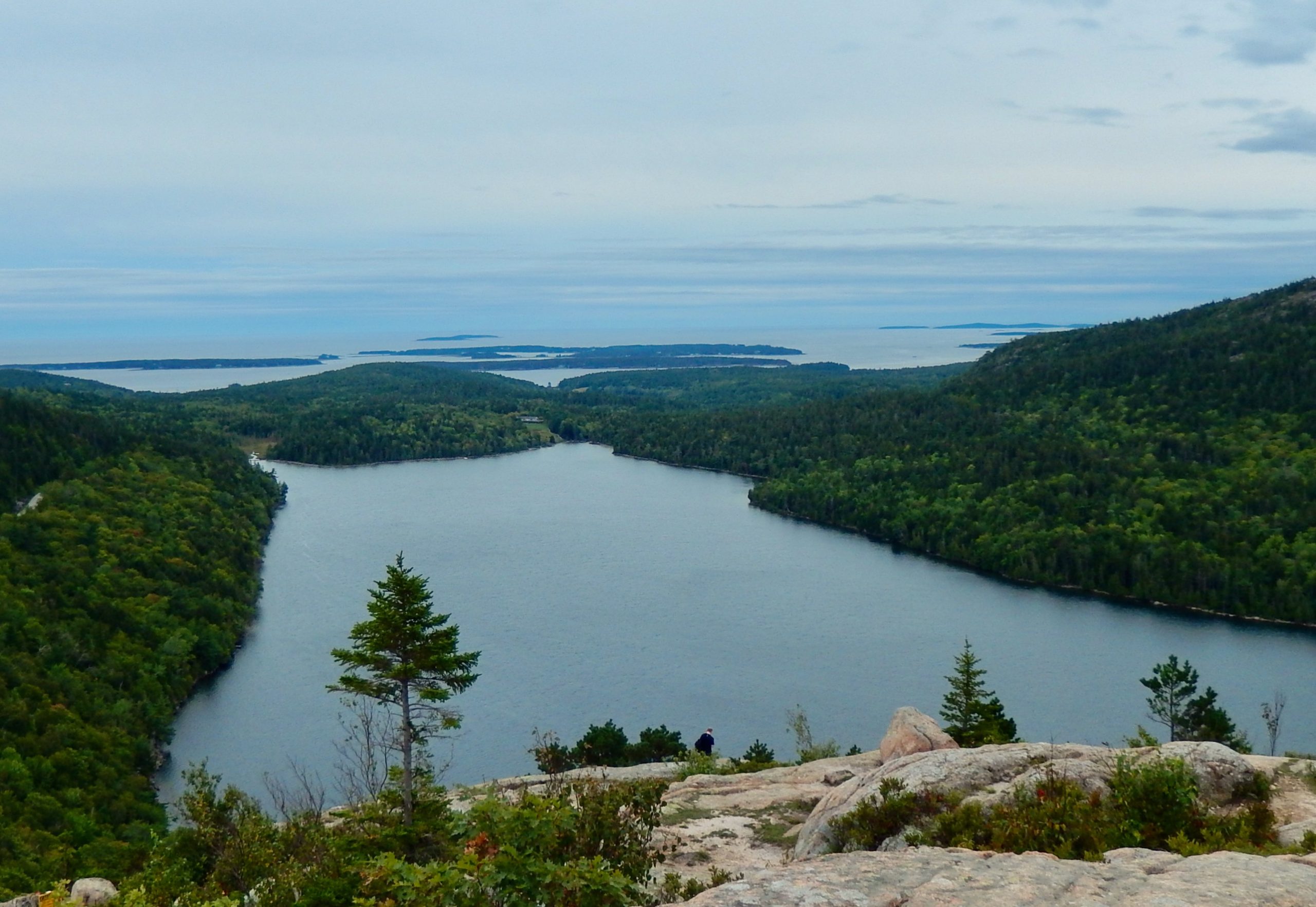 We took an easy route up, but ended up scrambling down a steep, boulder-filled “trail” that was about two degrees beyond my ability. But we made it down, and finished with a second hike around Jordan Pond, one of my favorite hikes in the park. Here’s a boardwalk on part of the west side, brilliantly designed, along with impressive work using large rocks to funnel water into the lake from the hill above. 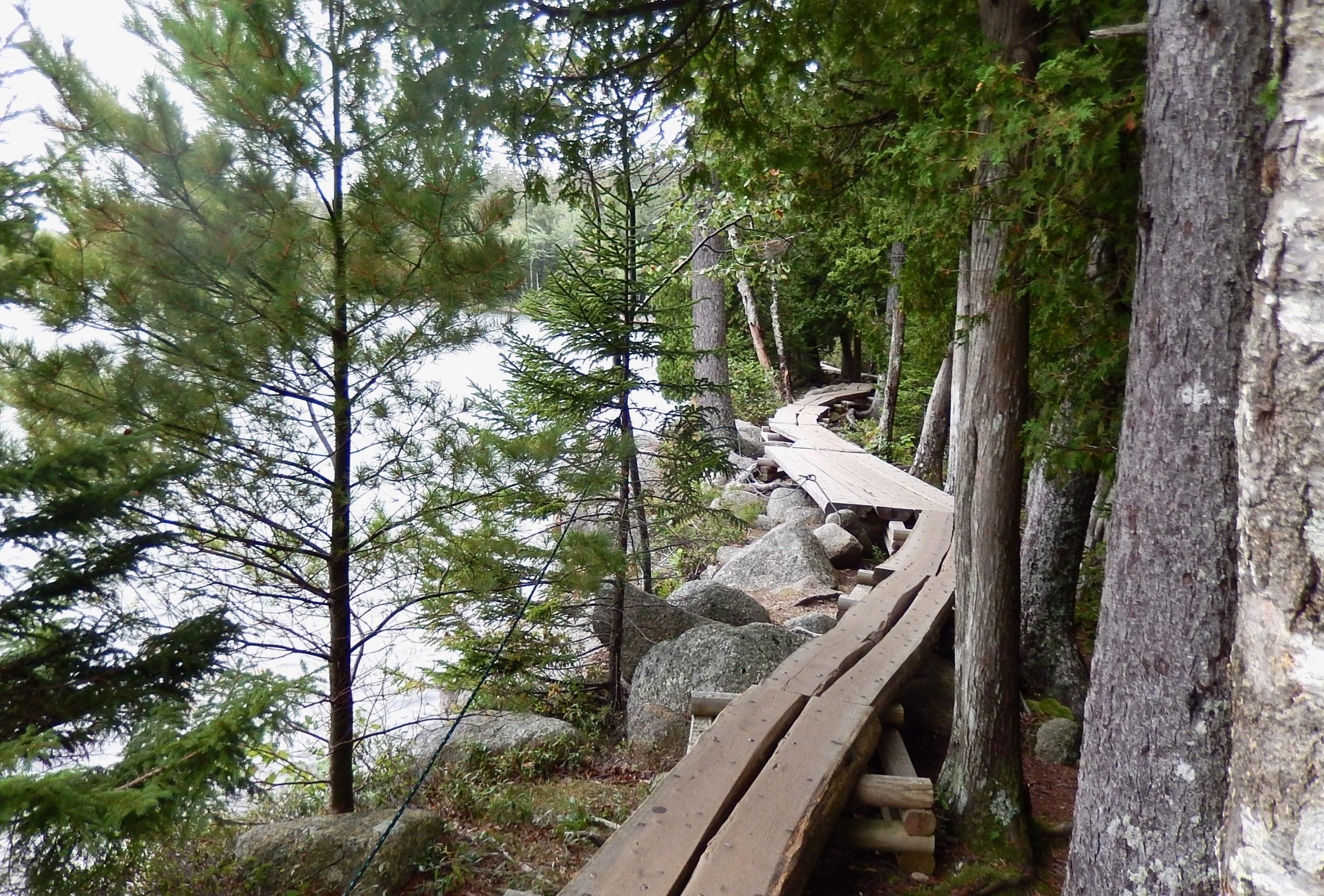 We stayed in a B & B well outside of Bar Harbor that had a stairway down to the beach. Since the tide there is 12-13 feet, you can’t get very far at high tide. But we got down several times at low tide, and marveled at the granite cliffs and tunnels within them. This is dear friend Melissa McCue McGrath of Considerations for the City Dog and BewilderBeats podcasts, fame, who met us with her daughter Ace for part of the trip. 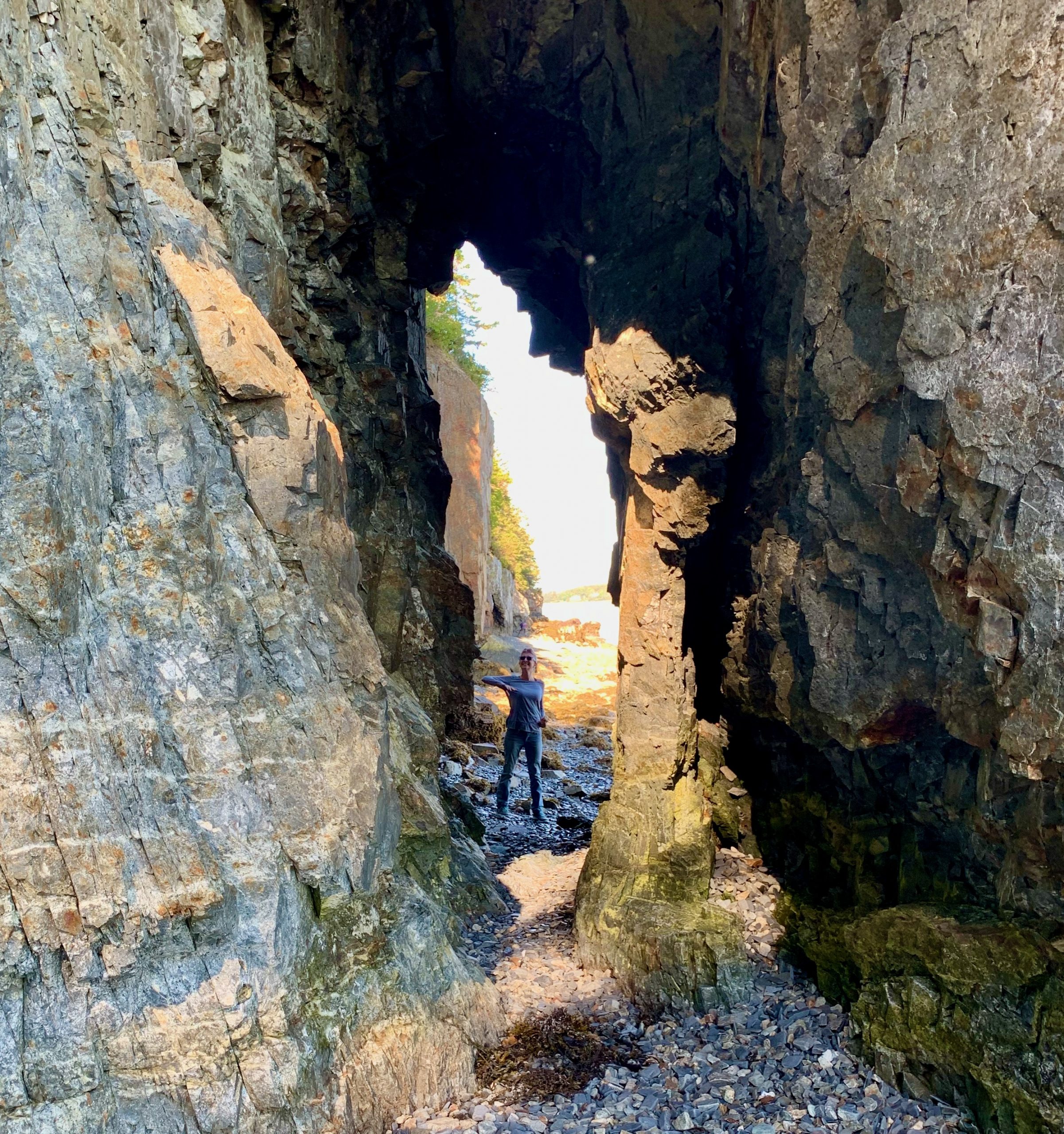 We also got to go hiking and spend time with Jim’s son Zach and partner Sarah, two mountain goats disguised as humans who could hike anywhere, anytime and not be tired. Here are us old folks, who had sore legs after two days of hiking, but were still in heaven to be in such a beautiful place. (Do you think I’m going to make “tucking your pants into your socks to keep them dry” fashionable?) 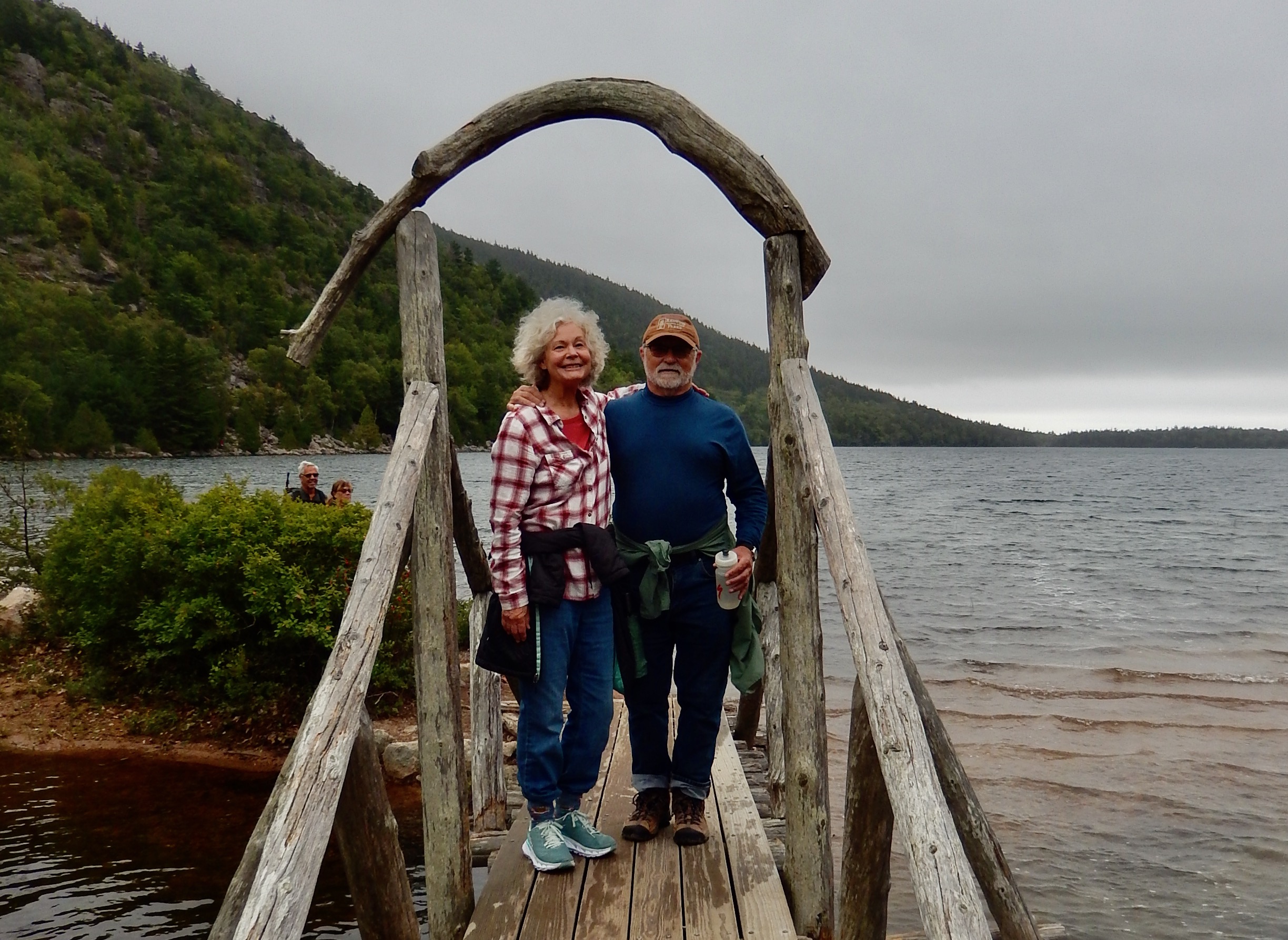 One day we got a reservation (necessary) to drive up the highest mountain, Cadillac Mountain, famous for amazing views. Here’s the view we got: 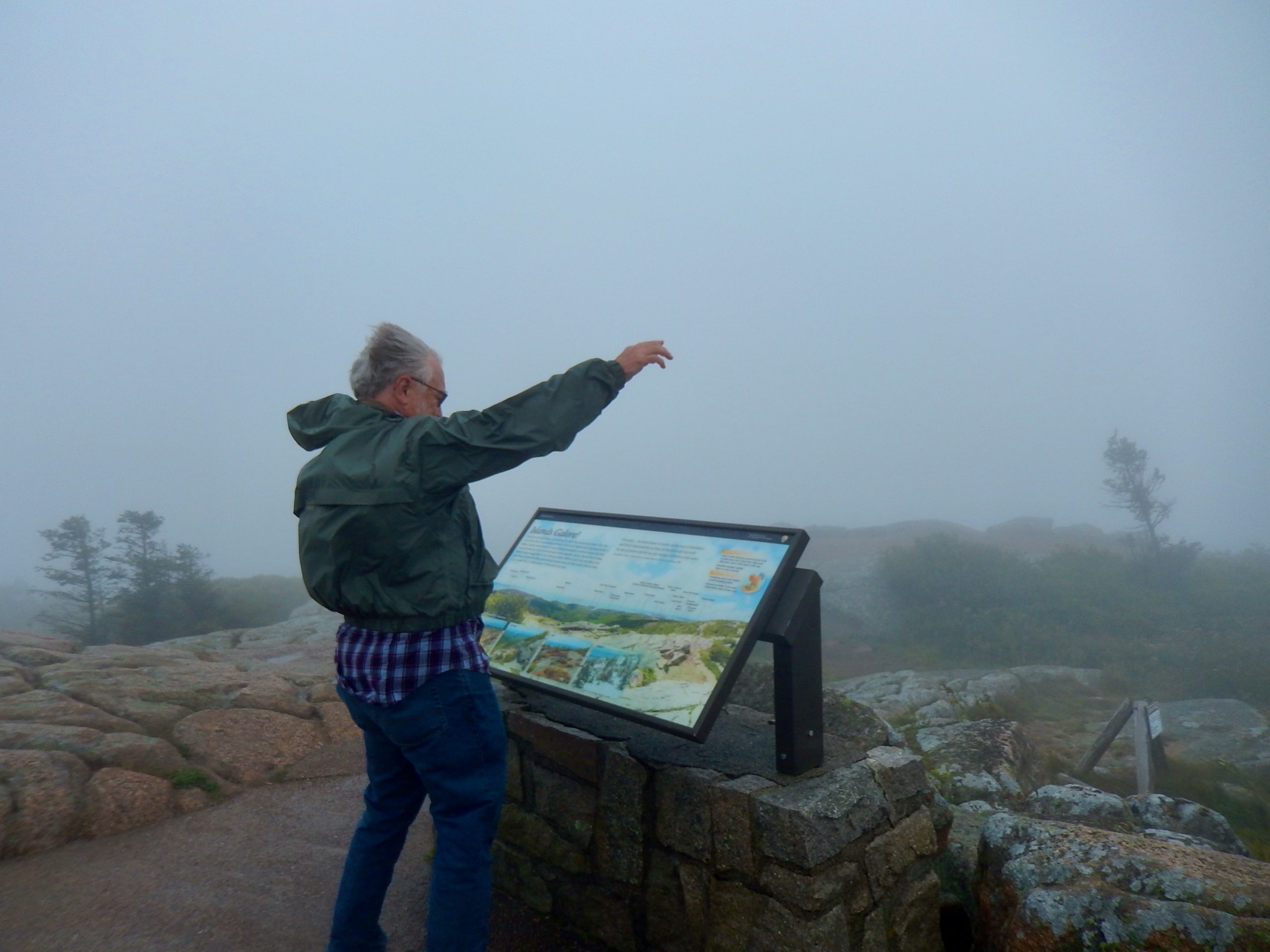 Yeah, pretty much a white out. But we’re glad we went, because it was just so damn funny and we enjoyed laughing with the others up there who hadn’t gotten the memo either.

Here’s what we got to see the next day, same location: 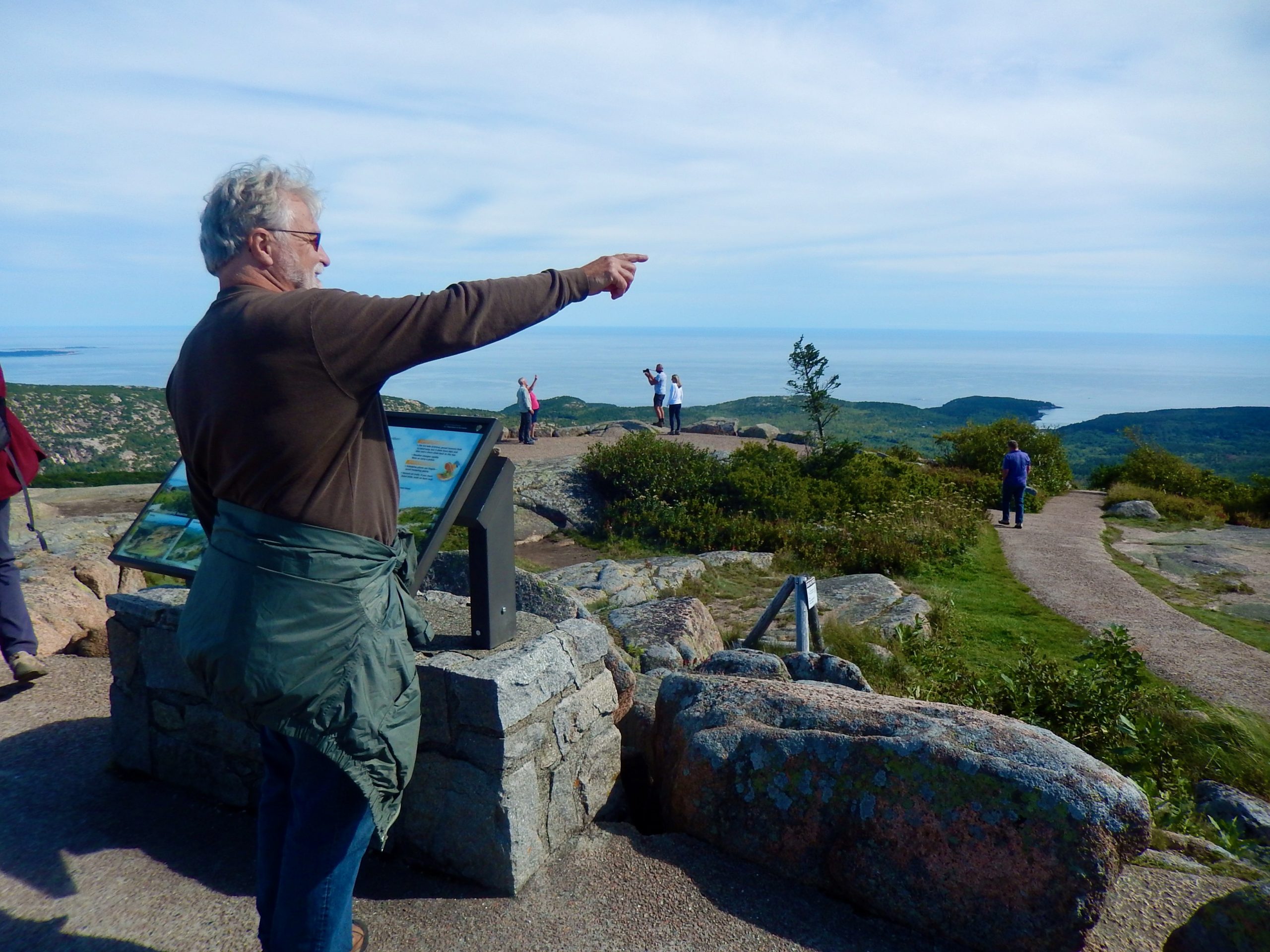 Now we’re home, soooo glad to see the dogs! Tell us if the phenomenon of “blank brain” or being stunned resonates with you, and what you think of my suggestion that it might happen to dogs too. I’m all ears.

Does My Dog Have A Food Allergy?