Home Training Anxious Owners, Anxious Dogs? – The Other End of the Leash 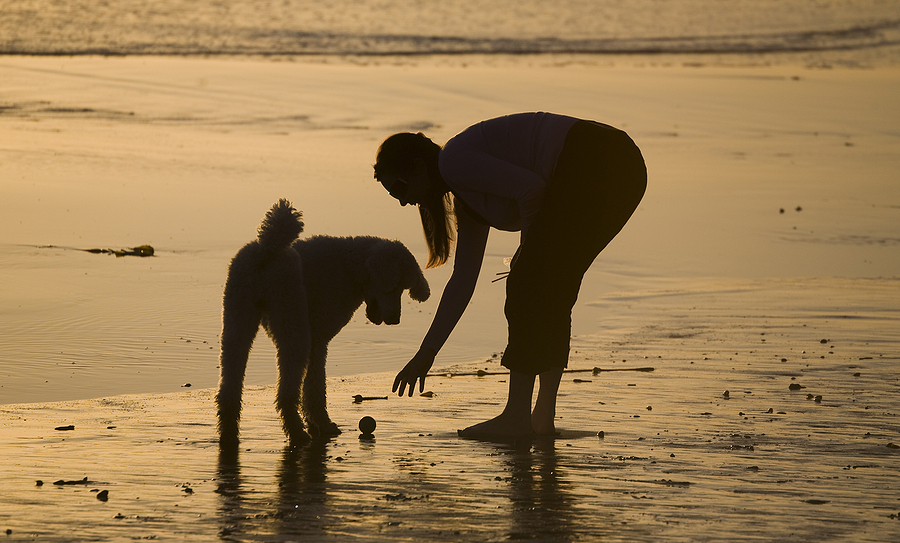 Dr. Hal Herzog, a PhD psychologist specializing in behavior and human/animal relationships (see Some We Love, Some We Hate, Some We Eat), recently wrote an article for Psychology Today that got my attention. Before publication, he talked to me about it briefly, with the following question: Did I find that anxious owners tended to have anxious dogs?

My response was a bit different than some of the others he interviewed, who said, “absolutely!” In contrast, what I remember most are the multitude of clients I saw who had healthy, happy, well-behaved dogs until they got “that dog,” the one who barked at everything or paced all night or was terrified of his own shadow. Often they would say things like: “I’m sure it’s my fault. Every time we see another dog approaching, I get nervous.” Given that they’d just told me that their dog had recently been attacked by another dog while out walking, or that their dog has been dog-dog aggression since the day they got him, that hardly seemed surprising. Part of my protocol was giving the owners and dogs both tools that helped them relax in that situation. (See Feisty Fido, for example.)

However, Herzog quotes a number of studies that bolster the idea that anxious owners have more anxious dogs than more relaxed owners. Many of these studies are based on a what are called “The Big Five” personality traits: extroversion, agreeableness, openness, conscientiousness and neuroticism. (More on that last category in a minute.) Each category is a continuum, and each of us can simultaneously have traits on each extreme. I, for example, am both extroverted (like to meet new people, start conversations) and introverted (tired rather than energized by social interaction.) Thus the categories contain a lot of nuance, but they hold up across every demographic imaginable.

I’m happy to say that recently there has been push back on using the term “neuroticism,” given its association with “irrational anxiety.” A better term, suggested by some, is “emotional stability” or “emotional resilience.”

Here’s how the Big Five relate to dog owners and dogs, from a segment in Herzog’s article:

“Over a dozen studies have now found relationships between at least some Big Five traits in owners and the behavior of their pets. The most consistent findings, however, focus on the factor usually labeled “neuroticism.” People who score high on this factor often experience negative emotions such as fear, guilt, anxiety, and stress.” The studies quoted found correlations between anxious or fearful people and dogs with behavioral problems, especially aggression. For example, researchers at the Clever Dog Lab and the Family Dog Project found not just correlations between personality traits in people and their dogs, but that “the owners’ and dogs’ personality scores were most similar for neuroticism.” 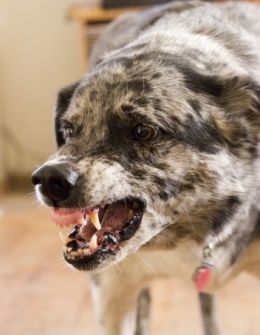 The question, of course, is what’s going on to create this correlation. Are anxious people more attracted to anxious animals? I don’t think that’s out of the question; I loved working with flighty horses and spent most of my professional career working with nervous or fearful dogs. I’ve always felt like I understood them. But I think the best hypothesis is that of “emotional contagion.” Emotions are “catching,” as we all know (and studies support); it makes sense that our reactivity has effects on our dogs. 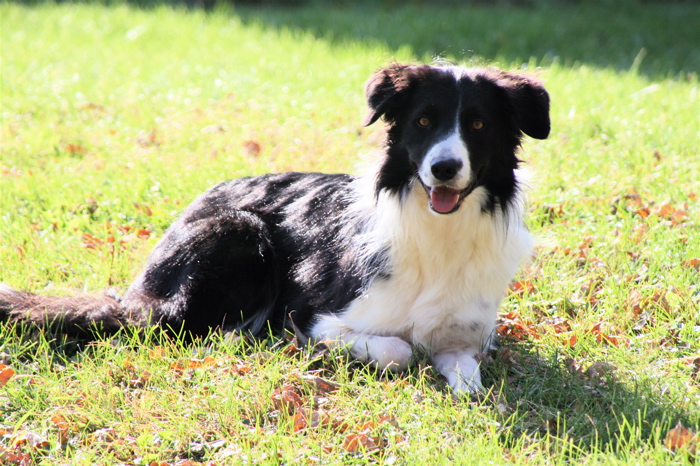 I wrote about this in The Education of Will:

“But there was something else—something that I hadn’t allowed myself to talk about. I was just as jumpy as Willie. While his reactivity set me off, I knew that my own startle response did the same to him. We were living in a vicious circle, each making the other worse. In my heart, I knew that in spite of my professional expertise, my own problems meant I wasn’t the ideal owner for Willie.  Heartsick, I leashed Willie, and we went out the door to the car. I put him in a sit/stay behind the car while I hauled the heavy ramp from the backseat and placed it so that he could climb in without jumping and reinjuring his shoulder. It was hard for Willie to sit and stay while I lugged the ramp around. When I turned to Willie to release him, he sat big-eyed and trembling, almost overwhelmed by the energy it took to make himself obey and control his almost-out-of-control impulses. His face was desperate with the need to leap forward—to move move move, oh-please-I-have-to-move—countered by his desire to be a very good dog, the very best dog anyone could ever have.

I looked at his imploring face, and my heart opened up so wide and fast that my knees went weak. As I released Willie from his stay and he climbed into the car, I knew that I could never send him away. I sat beside him while he licked the tears off my cheeks, and I whispered, “I will, I will, I will, Willie, I will move heaven and earth to try to help us both.”

On the other hand, Maggie was a more fearful dog when I got her than she is now. My previous dogs, from Border Collies like Mist and Lassie to our Great Pyrenees Bo Peep and Tulip, had none of Willie’s fears or over reactivity. My guess, just a guess, is that certain dog/person pairs are more susceptible to emotional contagion than others. Make sense?

On the other hand, I’ve always been fascinated by people who would be classified as exceptionally high on “emotional stability.” We all know one or two of them–people who are comfortable in their own skin, who seem to radiate a sense of peace and assurance that stands out and attracts us like moths to a flame. People want to stand beside them. Dogs adore them. Are you one of those, or at least know what I’m talking about?

The bottom line is that I find this entire issue fascinating, and can’t wait for your input on it all. Join the discussion–I will love reading what you have to say.

MEANWHILE, back on the farm: Whew, we are back, again, having been gone more in September than we’ve been here it seems. Last weekend we were at the Star of the North Stockdog Trial at Gayle’s Woods in Minnetrista, Minnesota. It’s one of my favorite trials, because the field is huge and gorgeous and surrounded by trees teasing you with fall colors. I hereby admit it: Part of why I love trialing is the aesthetics of it. Some fields are beautiful, some are flat and brown and boring. Guess which ones I like best. 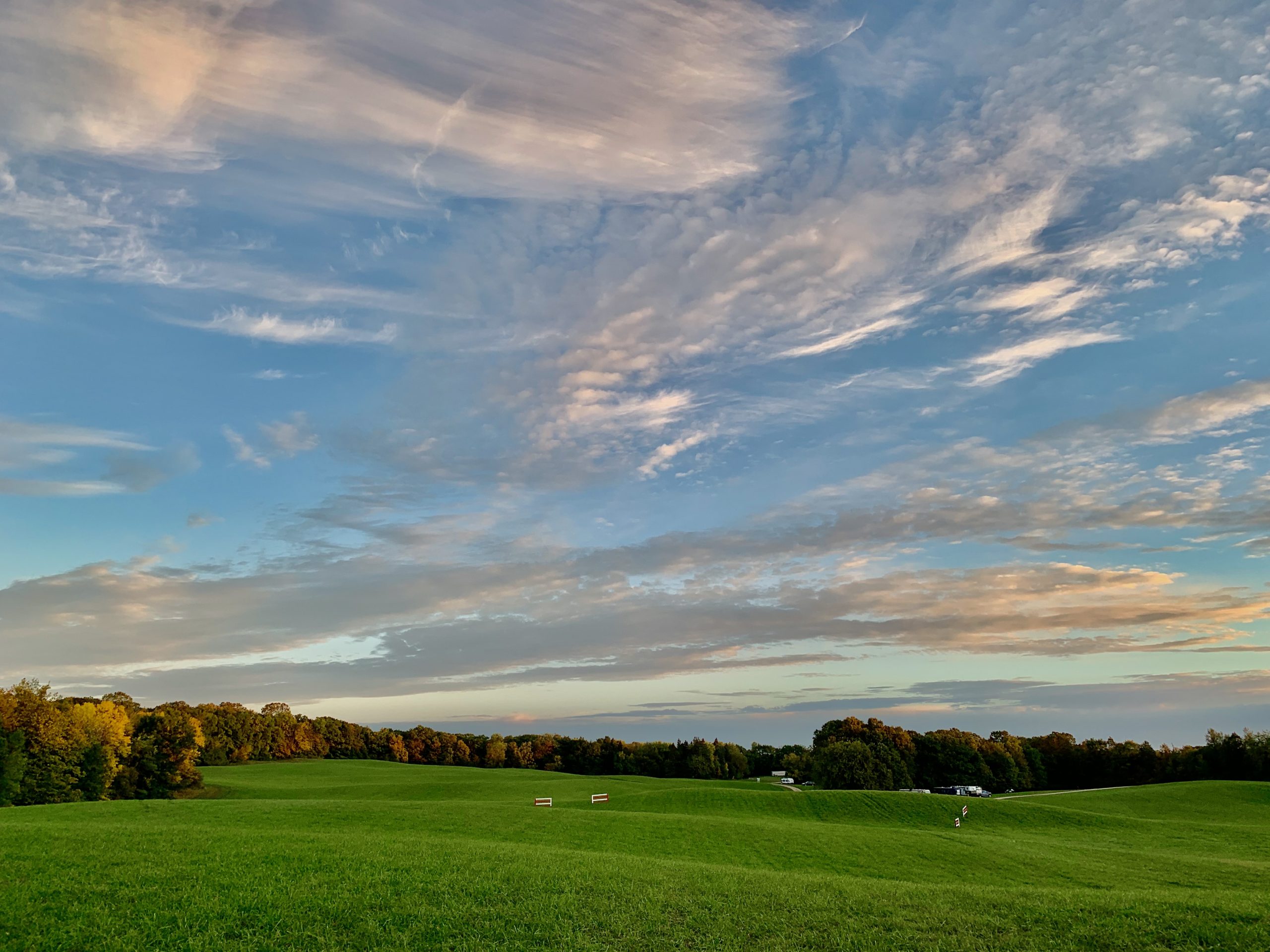 I scratched Maggie after deciding she was ready to retire, but she got to work on Sunday morning. We helped tuck the sheep into the rest area after the Novice runs, and moved part of the flock down the field to get set up for the Open runs. I love volunteering at trials as much as running in them; it’s a joy to let your dog do real work in different environments. We moved slowly so that the sheep could get a chance to graze; Maggie is perfect at moving sheep slowly and carefully, so this was a perfect job for her. 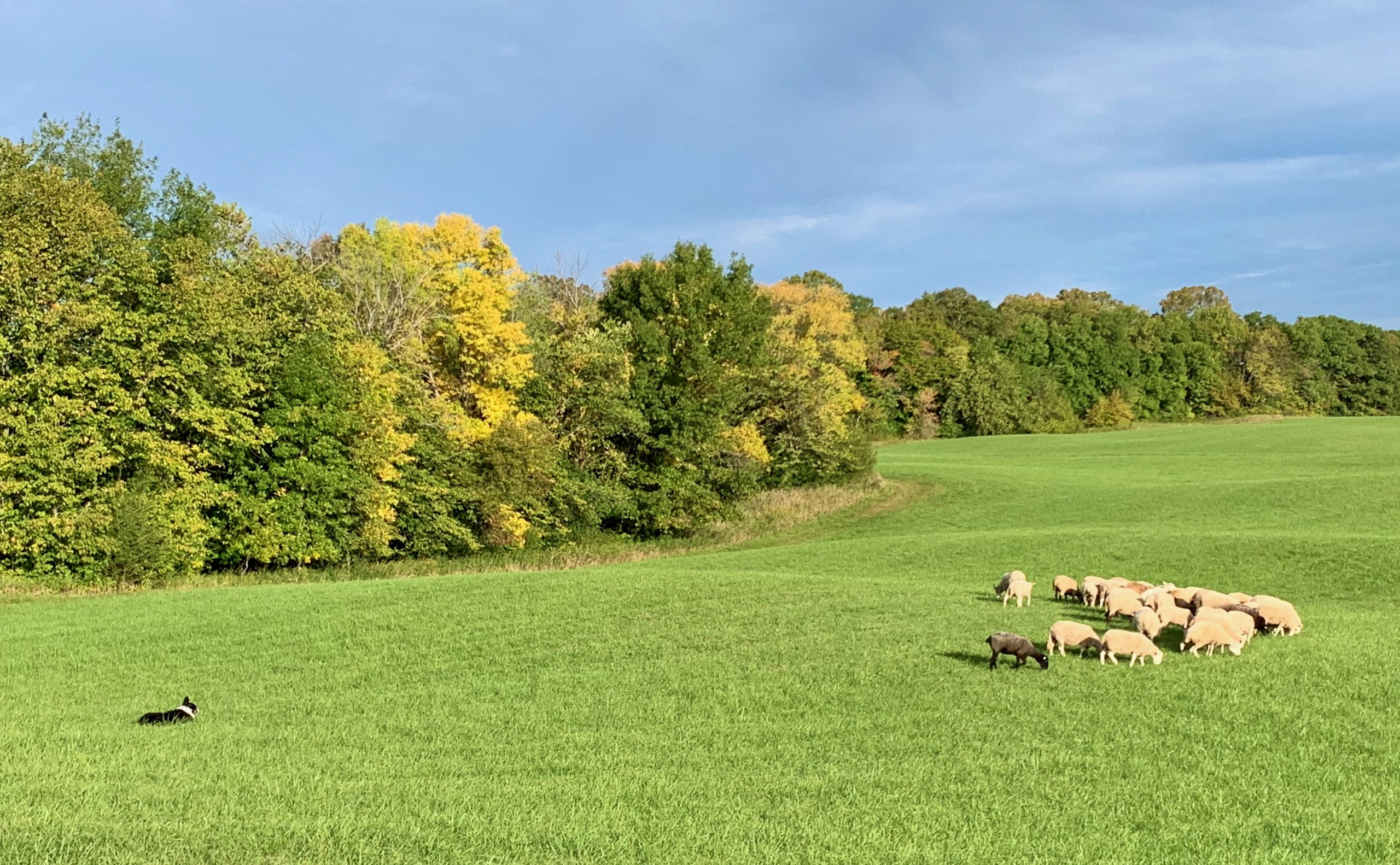 Skip ran in ProNovice, or the Intermediate class on Friday and Saturday. His first run was, simply, bizarre. I walked off the post and asked “who switched out dogs on me?” He did nothing I asked, and flanked around his sheep so big and wide he completely lost track of them. An experienced handler had a rational explanation–Skip and I had watched a ewe split off from the group like a deer, and ran behind a hill far away. Shannon Wolfe thought perhaps Skip was thinking about her, having never seen her being brought back to the group, and was looking for her.

I’m happy to say I got the dog I thought I had back the next day. Skip listened, and stayed right on the sheep but paced well. We tied for 3rd in overall points, but ended up 4th because ties are broken based on the “outwork,” (outrun, life and fetch) and Skip and I had lost more points on the fetch. Here’s the run:

If you’re into it, we got 76/90 total points, 17/20 outrun, 10/10 lift, 16/20 fetch, 23/30 drive and 10/10 for the pen. I knew we were close to being out of time, but had no idea how close til I watched the video. We lost a few points on the outrun because I gave him a slow down whistle (40 sec) before he got to the top, but I think it was the right choice. He had overrun the day before and I wanted to be sure he slowed down and thought about finding the sheep. He over flanked on the fetch (sec 58) which lost us some points, but he tucked in once he got closer and we got the line straightened out. I was slow when the sheep got to the post (sec 224) so we lost points on a semi-wide turn at the post. Starting the drive was a struggle for every team; ours wasn’t smooth but we got the job done and made all the gates. I closed the pen gate at the last second–you can see I was rushing cuz I knew it was close.

Our biggest challenge is that he tends to over flank (circle to their heads rather than a short flank that keeps him on their, well, flank). He’s a relatively strong-eyed dog who is attracted to their eyes as if magnetized, and I have to work on his short flanks. It’s all compounded by the fact that I have tended to stopping him short because of it, and then he loses control of the sheep. I also am working on a “speed up” signal; he paces too slowly for a dog his age and it makes it hard to get around the course before the time runs out. You could hear me encouraging him on–usually runs are punctuated by Lie Down! Lie Down! versus Speed Up! Work in progress . . .

I hope you had something good going on last weekend too, and I hope you chime in on the issue of “anxious owners, anxious dogs?” I’ll be looking for your comments, illuminating, as always.

Does My Dog Have A Food Allergy?